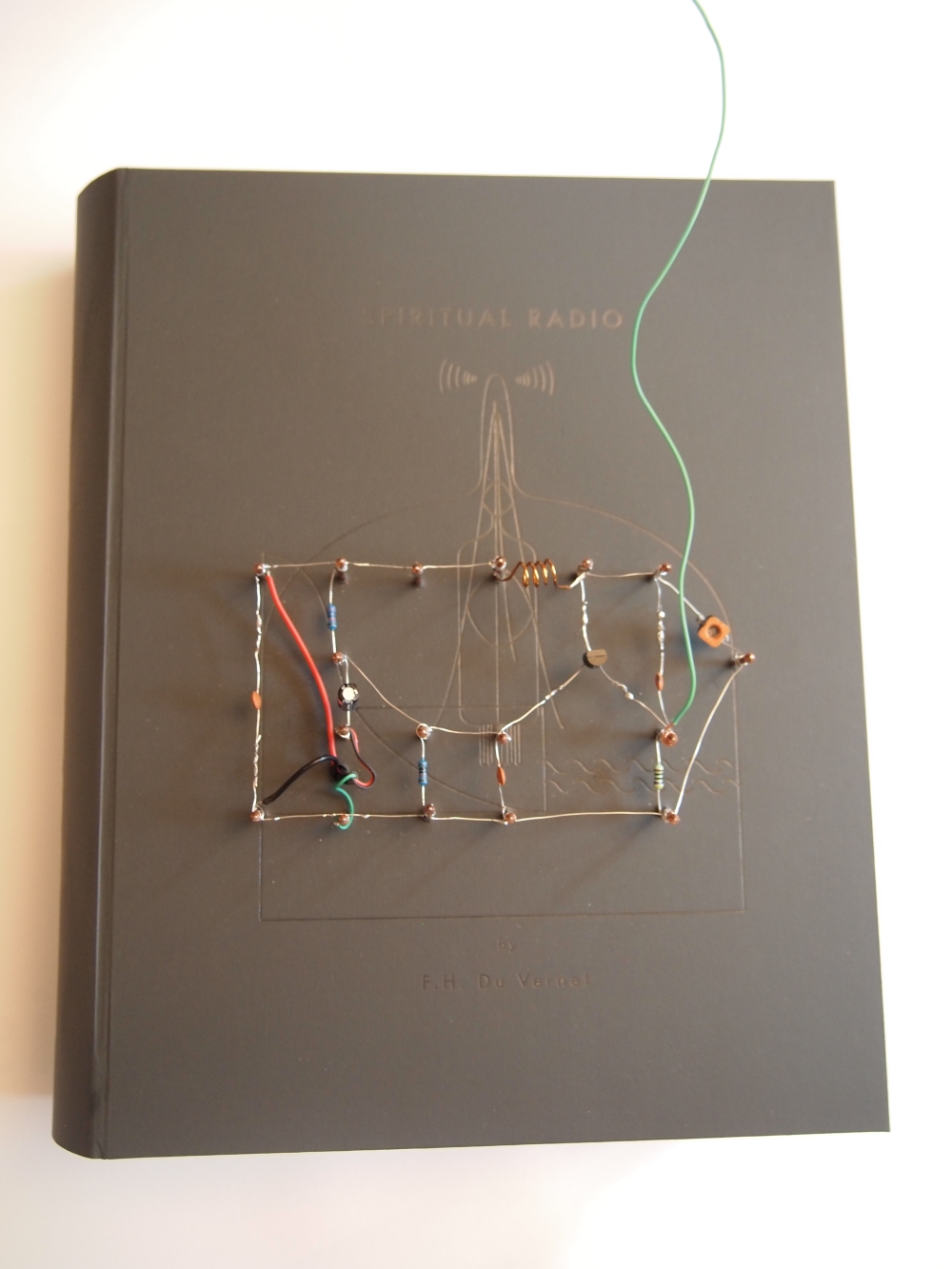 A ‘book-radio’ that transmits the words contained into an eternal loop, which cannot be conventionally read, rather the listener must tune to the right frequency in order to access it’s content. The text itself is ‘Spiritual Radio’, initially published in 1925, which sets out cleric and radio enthusiast Archbishop F.H. du Vernet’s vision of the nascent technology as a spiritually-charged electrical force capable of mediating human sensibilities and the transcendent will of God in a text that is by turns visionary and often absurd in the bathetic disjuncture between spiritual promise and quotidian reality.

What attracted you to the Unbinding the Book project?

The idea to make a transmitting book radio came along during a residency at the LV21 lightship, after having learned how to make an AM radio on wood using copper pins thanks to Colin Turner, the ship’s radio operator. These were very arresting to look at and sparked off the idea to make radio-transmitting-books using the same technique. I had already built many mini-FM transmitters on copper sheets in our Radio Arts ‘transmitter’ workshops and found that the circuit adapted well to this technique, as well as looking arresting. The ‘Unbinding the Book’ commission came along and was perfect fit for the idea, as Jotta were looking for artists who want to re-imagine the book form.

What drew you to the book as a medium?

The book, like radio, is old media, which I wanted to bring into the present day. In a kind of post-digital way, they are both resilient media forms, and by putting them together I wanted to make something new. I like the idea of a futuristic library of books all transmitting their contents.

Could you explain your practice?

I explore the artistic potential of radio and its use outside of conventional settings. I am interested in the possible futures of the medium and have produced a series of radio art installations, broadcasts and actions since 2008, under the banner of Switch Off which consider alternative futures for the FM as an overarching theme. This is also part of my practice based PhD at CRISAP, University of the Arts London titled: Radio After Radio: Redefining Radio Art in the Light of New Media Technology through Expanded Practice.

Could you describe your project?

I hope the final result will be an uncanny object. The pages shall be held shut by copper nails, connected by wires to form a transmitter circuit; transmitting the words therein in an eternal loop. It will no longer be conventionally shelved, rather the text awaits the listener who is tuned to the right frequency. They will hear ‘Spiritual Radio’ a book published in 1925, which partly inspired my Radio Mind installation, the book sets out cleric and radio enthusiast Archbishop FH du Vernet’s vision of the nascent technology, as a spiritually-charged electrical force capable of mediating human sensibilities and the transcendent will of God, in a text that is by turns visionary and often absurd in the bathetic disjuncture between spiritual promise and quotidian reality. A unique edition of the book will be bound and converted into a working FM transmitter, broadcasting the recorded text voiced by writer Mark Pilkington of Strange Attractor with James Backhouse (Xylitol) providing a soundtrack made from radio signals.

What materials are you incorporating into your work?

The transmitter is made with copper pins, wire, capacitors, resistors, transistors, and soldered together to form a circuit, the sound aspect uses audio, voice and music made from analogue radios. The book has been specially bound with the text and conceals an audio device and battery.

Could you tell us about Radio Arts, the organisation that you work within?

Radio Arts is an independent artists’ group that promotes radio as a site for creative experimentation. It was set up by myself and Jim Backhouse in 2001 and we have been joined by digital artists Tim Pickup and Nicola Schauerman (Genetic Moo). Radio Arts have broadcast, podcasted, held public workshops sharing our practice, making diverse radio art, radio transmitters and receivers. We have also produced sound installations led public interventions and put on shows. We recently commissioned new radio works for broadcast here and internationally and have plans to do more. We also held a radio arts showcase exhibition, the first of its kind, at the Beaney Canterbury where we installed 60 vintage radios and broadcast new work by Joaquim Cofreces (Argentina) Esther Johnson (UK), Michael McHugh & Noise Choir (UK), Gregory Whitehead (USA), James Backhouse and myself, whist Genetic Moo created a sound reactive visual work. We are open to new collaborations and are holding more free workshops. Find us at http://www.radioarts.org.uk

The term “artists book” implies that artists take a different approach to books to writers. Would you agree? How so?

Yes. For me it is about playing with the medium to create a new use or way of perceiving it.
All books are works of art and like the radio, the content is brought to life in the imagination. In keeping with my approach to artists’ radio, an artists book for me should explore the particular boundaries and potential latent to the medium; and in a sense, the re-evaluation of print and analogue media in the ‘post-digital’ cultural economy. It should provoke an investigation of what a book could become, freed from the constraints of utility.

What are the parallels between analogue radio and printed matter? What inspired this connection?

Both media have been able easily to move to digital forms, and both and gained and lost from this move. For me, the loss is when you look at a screen or listen to an mp3, the physicality of both is affected. The sound quality of an mp3 is poorer and the book loses its personality. On DAB radio you lose the hiss and static, as there is no tuning or bleeding between stations. There is a myriad of pros and cons in the way in which self publishing and the streaming of radios have revolutionised both mediums.