An extraordinary week, living in The Clearing was like living in a spaceship of sorts, nor more so as I stood winding the solar radio to the sound of 2001 Zarathustra by Richard Strauss composed in 1896, a time when the great mansion house of Compton Verney which sits across the lake from The Clearing was in full swing and home to the last Verney resident, Baron Richard Grenvillle Verney ( 1869-23). This visit was a tale of two houses and realities kind of like when Bowie, as the man who fell to earth, can see the past happening in the landscape. 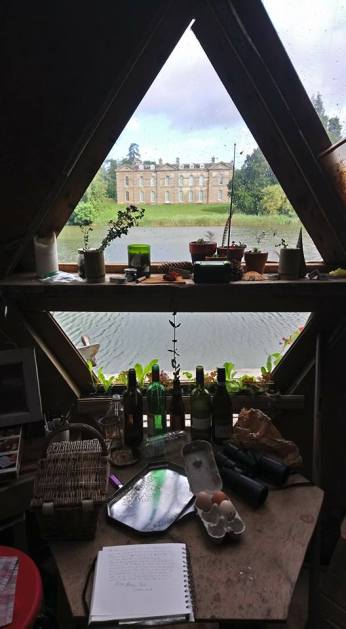 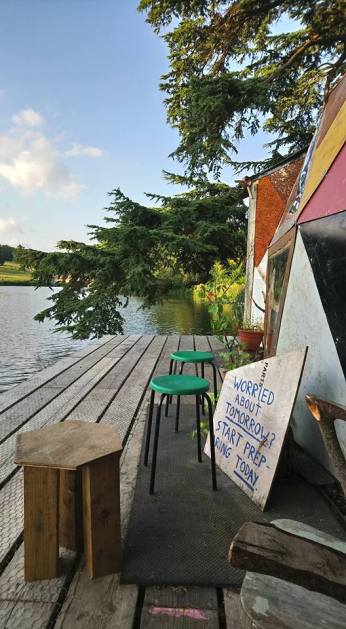 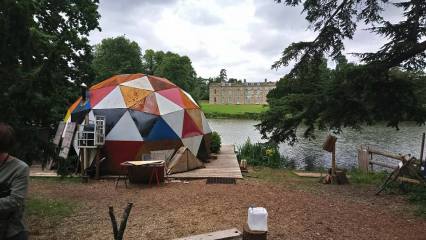 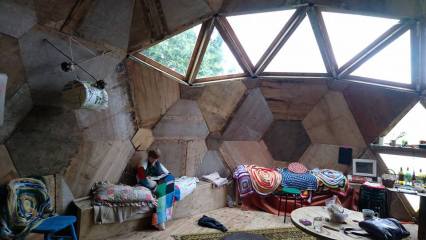 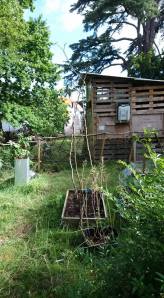 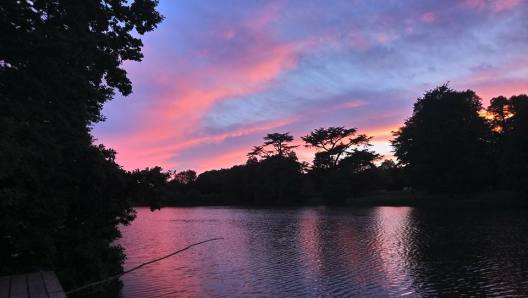 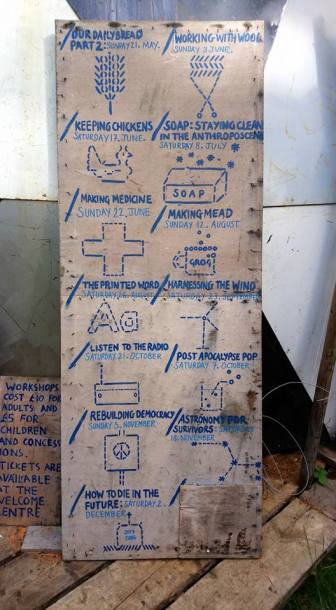 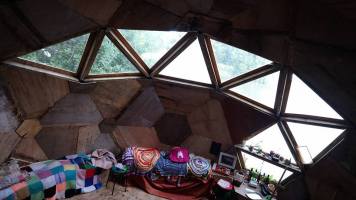 Compton Verney has been a gallery since 2004, a former stately home set in classical parkland designed by Lancelot Capability Brown. The Clearing was my home as caretaker for a week with my eight-year-old son Ewart, a geodesic dome home a copy of one of Buckminster Fuller’s American 60’s geodesic domes from the Californian desert, the iconic home of past hippy communes, set up as a collaborative artwork by Alex Hartley and Tom James as vision of future living.

The brief as caretaker was to live off grid for a week, wireless and solar charging meant I still could tweet if needed but no running water or gas meant all meals were cooked on a fire outside and very friendly scavenger chickens provided tasty eggs each day. This was our Walkabout of sorts like in Roeg’s film a tiny radio was our companion to the outside world, which only worked when wound or had enough sun. This meant blasts from the outside world were infrequent but instantly reshaped and enhanced our moments and mood.  That was the only similarity as we were not in the Australian outback but the green and lush landscape of rural Warwickshire, however the stunning lake we lived beside was unsafe to drink or swim in as water rats also called it home. Odd being so close to water the key resource we needed but couldn’t use. Every drop of water used on site was laboriously carried to the site, which meant it regained its worth as a valuable commodity and also punctuated our understanding of the project as our “projected” future, it was hard to ignore the fact that many in the world are already living such a reality. Thus we had a our own constant walkabout to fetch and carry water to the site.

Living in the installation meant visitors would pass by in the day and share thoughts, one told me that Buckminster Fuller had poor eyesight which helped his creativity, my own vision has started aging so it felt reassuring to know as I flicked though some great reading on the subject, books full geodesic domes across the last fifty years. The domes with impressive psychedelic glass roofs must have been far too hot to live in in summer,  The Clearing was at times too warm inside during our welcome sunny British summer. It seems Fuller’s driving inspiration was to make housing that was not damp or drafty after the death of his four year old daughter in 1922, of polio and meningitis, bad housing had affected her condition.

The sound that far overshadowed the occasional radio transmission, came from the building, it was made of recycled materials and softly creaked which was rather comforting.  The inside was made of plywood from the nose cones of airplanes with a colourful metal casing on the outside with straw and clothes packed as insulation between the metal and wood.  The sound of rain once inside was also rather spectacular. Lake birds of all kinds, geese, swans, kingfishers and herons shared the day with calls and impressive flybys. The sound of traffic passing over one of the most scenic bridges I have ever seen was also strangely hypnotic and annoying at times.

I was living out a childhood fantasy to live in a geodesic dome to sleep and sit inside having breakfast watching the day pass by through the huge geodesic windows or sit on deck at sunset and at night when soft bats rushed around as three solitary ghostlike lights shone out from Compton Verney attic windows reflecting on the dark lake, a kind of secret installation that only fellow clearing residents can see. I don’t think this is the future living as it felt like living in the past, for many it is the present and it reminded us how little we really need and how much I do enjoy a hot shower at the end of a week. But the space itself and the setting was amazing and very homely, already wishing I could go back next year. Memories, feelings and sensations of The Clearing will stay with me for forever and I am sure will have a lasting influence on my son Ewart, this was the perfect way to experience a more eco-friendly life style and encounter the excellent op art exhibition by being part of it and most importantly it was a space to reflect.

There is a radio workshop happening in 21st Oct