I am doing a winter residency at the Watershed PMS in Bristol and writing a blog about my time there and work in progress:

Air Matters: Learning from Heathrow is a forthcoming exhibition and programme of events at Watermans Arts Centre, 8th October – 31st Dec 2019, that explores the politics of air at London Heathrow. For some, the air at Heathrow is a space of networks and travel. For others, it is what they must breathe. The conflation of diverserequirements within one locale presents a significant societal challenge that hasimplications for sustainable development, well-being, and dignity. Air Matters responds to these challenges, bringing together newly-commissioned artworks, workshops and a symposium.

The exhibition will comprise of six commissioned works by Kate Carr, Nick Ferguson, Matthew Flintham, Magz Hall, Hermione Spriggs & Laura Cooper, and Louise K Wilson. Through investigations into sound and geography we will consider how the air shapes what can be felt and performed. Through study of birds and other airborne life, we will identify competing users of the air. Through mapping patterns of movement, we will make visible aerial architectures. We will ask what art can teach us about the air

My own contribution “Skyport” named after the Heathrow based 70’s pirate station, will take the form of a radio inspired sound installation that exploring Heathrow, airspace across radio frequencies. I have been looking into the history of radio scanning and the areas ongoing pirate radio legacy. Which is proving to be very fascinating, indeed and will share more over the next blog.

I contacted Terry Anderson who was a DJ on the stations in the 70’s who very kindly shared with me his memories of his time at the station which was broadcast from a tiny shed near the airport runway. I am doing a bit of digging to try and find out the exact location, if anyone knows please get in contact. 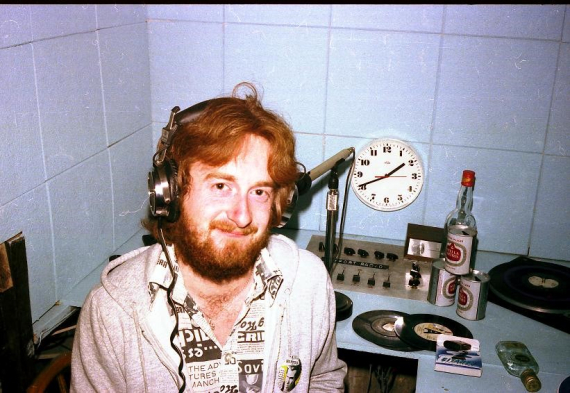 “I was asked to join Skyport by a friend (Rob), who already had a show on the station. I was aware of pirate radio having listened to the offshore stations in the 1960s, and then later the land based pirates, Radio Jackie, and Kaleidoscope Radio. Although I did think that the pirate radio stations had an exciting edge to them, the truth is I was motivated by the idea that I could play music that I loved to people listening all around the world.

At the time I joined, Skyport had (if I recall correctly) a left wing feel to some of its programmes, as a rebuff to the rise of the National Front and other racist organisations.

In addition, much of the listenership from around the world seemed to contact the station to ‘prove’ they were listening in some far flung corner of the globe and then receive a card to add to their collection – there was a worldwide form of club for people who listened in to shortwave stations.

I was less interested in this and was simply enthused to be a radio presenter, playing music that I loved. At the time, it was the growth of punk music and I played The Clash, Sex Pistols, Siouxsie & The Banshees and so on, and also added the reggae music to which I was thoroughly devoted (still am!) with artists such as Ken Boothe, Gregory Isaacs, and Sugar Minott.

It was a long time ago but this is what I recall of the circumstances: I used to take the train with Rob to Feltham and we would walk to Mark King’s house, where he lived with his mother. The shows were broadcast on a Sunday but we recorded them on (I think) a Thursday evening. The studio was in a shed at the bottom of the garden and it was very cold indeed in winter – there was a line that ran to Mark’s bedroom back in the house from which the shows were engineered (in the sense of checking levels and so on) and recorded onto (if I recall correctly) a reel-to-reel tape machine. I had complete freedom to play whatever tracks I wished and I cherished that. Mark was a very pleasant man, and his mother was extremely kind, providing cups of tea and so on.

I was never really interested in the nuts and bolts of how the station got on air. From memory I think Mark simply took the risk of broadcasting from his house on Sunday mornings. I don’t recall the station ever being raided by the authorities (maybe they weren’t so interested in shortwave stations).

The studio set up worked very well but it was basic – a couple of record decks and (I think) a cassette or cartridge player. It was very close to the runways at Heathrow and I imagine there may have been aircraft noises in the background but I don’t recall this.

The main part of the experience that I enjoyed was that it gave me a first start into broadcasting and I was given the freedom to learn on the job and from my mistakes. The least enjoyable parts were the cold in the winter months in that shed, and the fact that it was shortwave only which restricted the audience – this was what motivated all of the presenters to move to a new FM based radio station the late summer of 1978 (Uptown Radio).

I did attend some sort of ramshackle meeting of pirate radio stations in London but this was a year or two later. There is a well-known story in the history of pirate radio in that on my way home after this conference/meeting I was recognised on Waterloo station by someone from another pirate radio station that coveted our frequency – so he threatened me with a shotgun and told me I should tell everyone on our station that we should move frequency, or else…! We didn’t move and I lived to tell the tale.

I recall there was a ‘political’ station around at the time (was it Radio Enoch?) but I have no memory of it. I suspect it was notorious because of its name and intentions but probably had only a handful of listeners. At this time there was much concern about the rise of extremism and I attended many events protesting against the National Front and similar organisations – the best were those organised by Rock Against Racism; I particularly remember a great day with a march to Victoria Park in Hackney and a scorching gig in the park with X-Ray Spex, Tom Robinson, Steel Pulse, and a magnificent performance from The Clash.

I truly don’t believe that any right wing radio stations had any serious impact at that time. Shortly after Skyport, Uptown, and (I think) Thameside Radio, I moved into mainstream media and forged a career in radio, television, and film.” 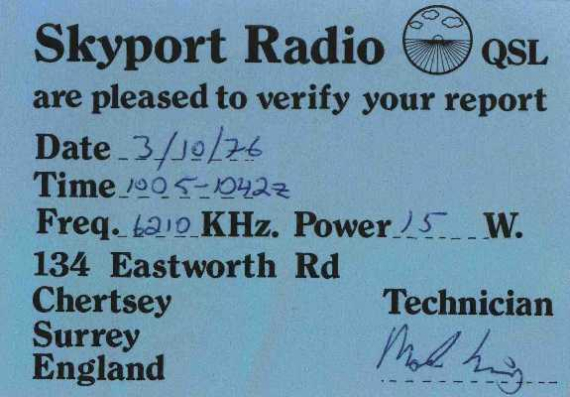